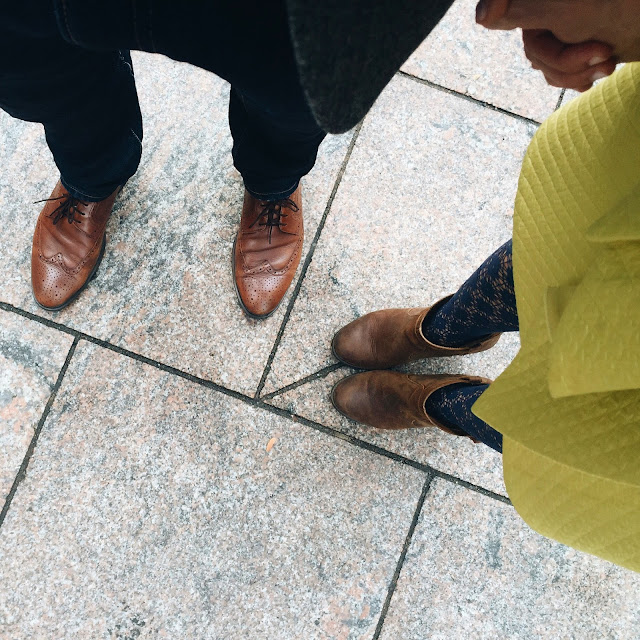 we celebrated our first dating anniversary by going on our first date all over again -- drinks at the bryant park hotel and pizza at vezzo, with a little stop on the very corner where it all began. over bourbon and bubbly, we toasted to us and imagined together where we'll be this time next year.

fun fact about the bryant park hotel: built as the american radiator building in 1924, its black brick symbolizes coal and gold brick symbolizes fire. how about that for a nod to the gothic art deco days of yore? but i digress.

it's funny what stands out to each of us from that very first night. i remember his dimple and his shoes (the same ones he's wearing above, come to think of it); he remembers my smile. we both recall how conversation felt familiar -- how, from the start, we felt we've known each other all along.

some of our highlights from year one:
a second date at supper. hell's kitchen, talking until three in the morning -- & meeting at the farmers market six hours later, where he bought me a donut. diner breakfasts in the snow. a phone call on christmas eve, while we were both shopping last minute -- at a mall in new jersey (him), at a record shop in south carolina (me). twelfth street. when he came to my office in the middle of a monday so we could sip coffee and watch the ice skaters in bryant park. new years eve -- & how we were both in love but neither said it just yet. fried chicken and champagne on my 27th birthday. his handshake meeting my father. modern family and fro-yo on wednesdays. that one dinner by the fire at alta. everything bagels, not toasted. jacob's pickles. coffee, always coffee. new york in the summer: picnics under the brooklyn bridge, popsicles on the high line. snorkeling in st. john on his 28th birthday. when our flight to raleigh was canceled and we got caught in a rainstorm on columbus avenue. going to the park a lot. fiftieth street. charleston in june. him, encouraging my photography. me, cheering him on at soccer. that foggy drive through the smokies in september. new york in the fall: long walks and row boats and cappuccinos to keep our hands warm. a treehouse for two. daydreaming together -- of paris, of babies (with dimples, please let them all inherit his dimple), of moving across the ocean for a bit, of living all of it together for such a very long time.

Labels: celebrating, my christopher, us